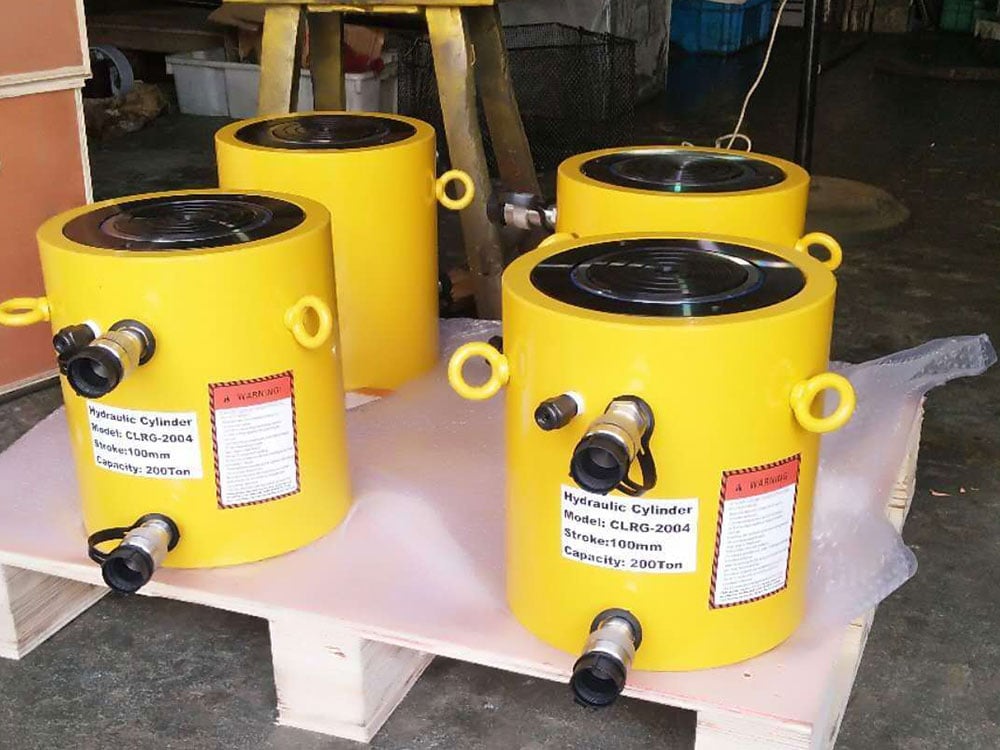 Single-acting cylinders generate force exclusively in one direction, whether it is a push or pull action. These are also referred to as “plunger” cylinders. They are utilized in lifting operations where hydraulic pump pressure stretches the hydraulic cylinder and a mass or spring retracts it. Single-acting cylinders contain only one port through which the hydraulic pump’s pressurized oil passes. This causes the piston to extend in one direction, compressing the piston’s spring. After releasing the air via the cylinder port where it entered, the spring or associated mass will retract the piston rod.

The lower manufacture, installation, and repair costs of single-acting hydraulic cylinders are an advantage. With only one port to operate instead of two, both piping and valve costs are significantly reduced.

The spring mechanism in single-action cylinder interiors necessitates venting, which provides the unit with an outlet to the outside world. Particles, on the other hand, can enter the cylinder and create potential malfunctions or a slow loss in performance if not adequately monitored.

Single-acting hydraulic cylinders are ideal for use with smaller equipment due to their single port and compact structure. Most of the time, if a smaller equipment design allows for ports, fluid transmission, and venting, then this cylinder will be extremely suitable.

The Benefits Of Single-Acting Cylinders

Single-Acting Cylinder Are Used In:

Pressure flows from two ports in double-acting hydraulic cylinders. The “advance” hydraulic hose fitting connects to one of the ports. The pump’s hydraulic power forces the cylinder to extend via the first port. The “retract” hydraulic hose fitting is connected to the second port. Hydraulic power is used to extend and retract the cylinder in a double-acting hydraulic cylinder. In contrast to the single-acting cylinder, which produces force in only one direction, force is generated in both directions. As a result, the cylinder may both push and pull.

The piston rod moves due to the push and pulls forces created by the pressurized fluid that alternates between both sides of the piston. These hydraulic cylinders have more control over their movement in the application where they are installed. Using 2-, 3-, or 4-way position valves, different levels of movement can be produced. Double-acting hydraulic cylinders are utilized in mobile applications such as a TLB’s boom or to control the steering of an excavator.

Though this hydraulic cylinder is not appropriate for small places, double-acting hydraulics are extremely versatile. Two ports provide hydraulic power in both directions and are readily operated with a push-and-pull motion. As a result, they are the most popular hydraulic cylinder.

There are no venting issues.

Unlike single-acting variants, double-acting cylinders are sealed from the outside world. As a consequence, you will not require repairs as a result of particles invading inside pipes and valves.

Precision work that needs hydraulic pistons to stop at specific lengths regularly can stretch and deform the hydraulics over time. However, double-acting hydraulic cylinders are constructed with exact, very precise dual ports, enhancing the product’s longevity.

The Benefits Of Double-Acting Cylinders

Double-Acting Cylinders Are Used In:

Large-scale engines (such as ship motors), industrial furnaces, digging machines, lift shafts, steering systems, and any other application when an external source of power is not present to retract the piston. 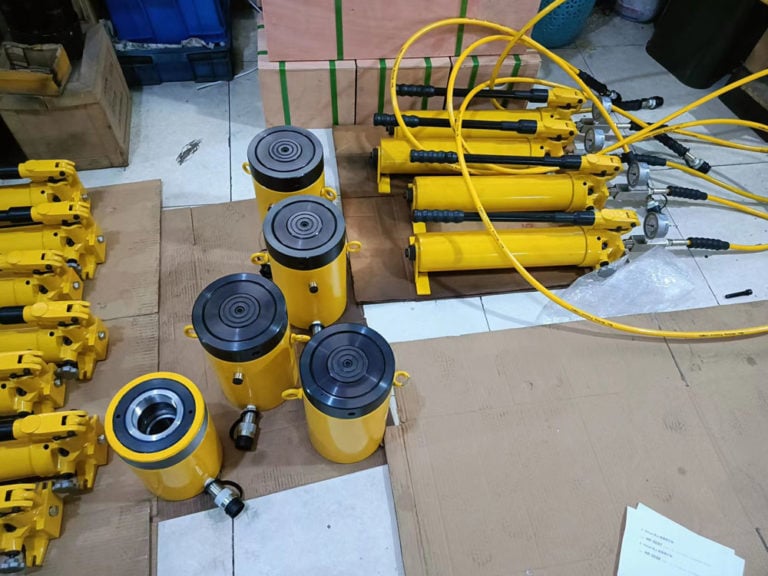 Calculate Force in Your Hydraulic Cylinder the Easy Way

In hydraulic systems, force is a crucial element in controlling the flow of liquids and gases. In this article, we will discuss how to calculate the force exerted by a hydraulic cylinder. First, we need to know the dimensions of the piston and cylinder. Second, we need to know the working pressure of the hydraulic cylinder. The force exerted in a hydraulic cylinder can be calculated using the following equation: F = P x A. where F is the force, P is the pressure of the fluid in the cylinder, and A is the working effectiveness area of the piston. This equation can be used to calculate forces in any hydraulic system. For example, the effective area of a double-acting cylinder is 0.145m² for push and 0.048m² for retraction, rated working pressure is 70Mpa. The pushing force should be  F(push)=70MpaX0.145m²=10.15Ton, and the pulling force should be F(pull)=70MpaX0.048m²=3.3Ton.

Project Images Project Introduction 50-ton low height pancake hydraulic cylinders used in auger boring steerable rock system.Steerable head designed for boring through sand or soft rock with real-time steering adjustments made out of the pit with a hydraulic control system. The Steerable Rock System (SRS) is the auger boring market’s first steerable head designed to navigate not only solid rock but difficult fractured rock conditions as well. Engineered to operate in rock up to 25,000 psi, the SRS allows operators to keep bores online and grade even in the toughest ground conditions for an on-grade bore. On the drilling head, there is peace’s of small round pipe, that’s where the cylinders sit. There are 4 pcs 50-ton pancake hydraulic cylinders on each side(top, bottom, right, and left) of the steerable head for a total of 16pcs, it works when it’s drilling horizontally underground we use the cylinders to navigate the drilling head. 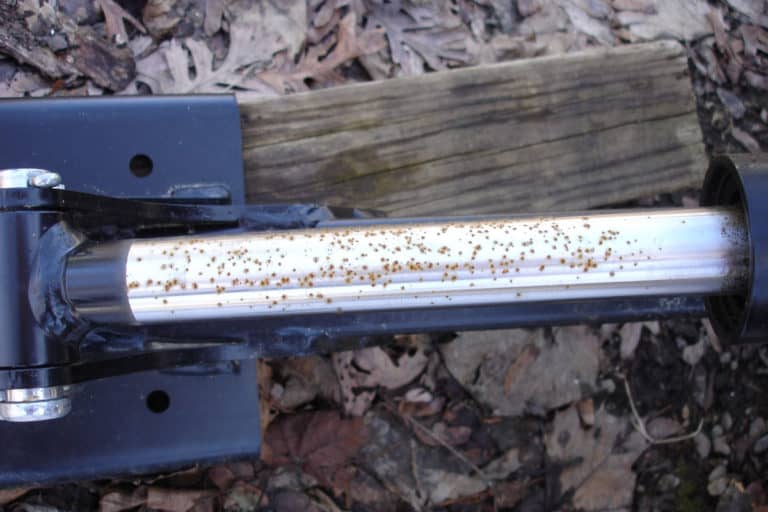 how to clean rust off the hydraulic cylinder

Rust is a common problem that can affect hydraulic cylinders. The corrosion caused by rust can lead to pitting and other damage to the cylinder, which can cause it to fail. In order to avoid this, it is important to take steps to prevent rust from forming in the first place. Why does rust form on hydraulic cylinders There are several reasons why rust can form on a cylinder. One reason is that the cylinder is not properly sealed. If dirt, moisture, or other contaminants get inside the cylinder, they can cause rust to form. Another reason why rust can form on a cylinder is because of the material that it is made out of. Some materials are more prone to rust than others(learn more about the materials used in cylinder production here). And finally, the way that the cylinder is used can also contribute to rust formation. The various ways that rust can be removed from a cylinder Rust can be very difficult to remove and often requires the use of special tools and chemicals. There are several methods that can be used to remove rust from a cylinder head. One common method is to use a wire brush to scrub off